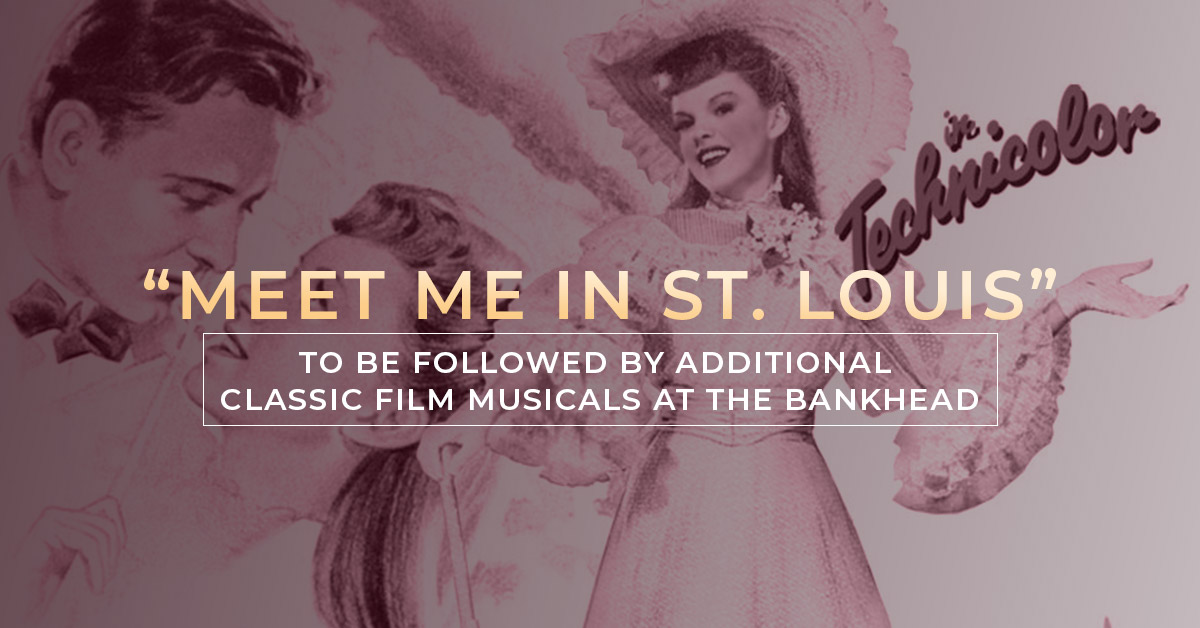 “Meet Me in St. Louis” to be Followed by Additional Classic Film Musicals at the Bankhead

Screening dates for four more classic film musicals at the Bankhead Theater have been announced, extending the popular series through May 2019. The last in the current series, “Meet Me in St. Louis” starring Judy Garland and Margaret O’Brien, will be shown on Wednesday, November 28 at 7 p.m. The series will then resume in February 2019 with the Fred Astaire and Ginger Rogers favorite “Top Hat,” followed by “Oklahoma,” “Brigadoon,” and the 1954 version of “A Star is Born” featuring Garland.

About the Classic Film Musicals

The Classic Film Musicals series, launched earlier this year, offers audiences the opportunity to enjoy some of the greatest movie musicals as they were meant to be seen, in a truly theatrical setting. Tickets cost just $5 each for the full-length feature films, which are preceded by a cartoon and newsreel of the era. Popcorn, movie treats, and beverages are available in concessions before the show.

“Meet Me in St. Louis” and other classic film musicals

The holiday-themed “Meet Me in St. Louis” revolves around Esther Smith (Garland) and her three sisters as they look forward to enjoying the 1904 World’s Fair before their family has to move to New York. In addition to “The Trolley Song,” the film includes the iconic “Have Yourself a Merry Little Christmas,” which was a hit for Garland and became a holiday standard.

One of the most beloved Astaire/Rogers films, “Top Hat” features the sophisticated “Cheek to Cheek” number, one of their best-known dance sequences with its sleek footwork and flying feathers. “Top Hat” will be followed by “Oklahoma” in March, starring Shirley Jones and Gordon MacRae. Filmed in 1955, the Academy Award-winning score by Rogers and Hammerstein features some of their most famous tunes including the title song, “Surrey with the Fringe on Top,” “Oh What a Beautiful Mornin’,” and “People Will Say We’re in Love.” With its unusual time traveling storyline, “Brigadoon” stars the exceptional dance partners Gene Kelly and Cyd Charisse in a classic romance set in an enchanted Scottish village with songs such as “Almost Like Being in Love” and “Heather on the Hill.”

Last in the 2019 spring series will be the 1954 version of “A Star is Born,” one of the most expensive films of that era, which starred Garland at the height of her career, opposite James Mason. Garland’s renditions of “The Man That Got Away” and “My Melancholy Baby” went on to become lasting hits. The 1954 version was a remake of the original from 1937. It has since been remade twice more, including the current 2018 version starring Bradley Cooper and Lady Gaga.

As aforementioned, Esther Smith (Garland) and her three sisters are caught up in the excitement of preparing for the 1904 World’s Fair. She is in love with the boy next door, who has yet to notice her despite her somewhat clumsy efforts. When her father tells them they will be moving to New York City, each of the girls is upset for their own reasons until twists and turns lead them to an eventual happy ending.

There’s no question that “Meet Me in St. Louis” is a must-see during the holiday season. Best of all, ticket prices are just $5 each! Just keep in mind that all attendees must have a ticket, regardless of age.

The Livermore Valley Performing Arts Center is an independent 501(c)3 non-profit offering wide-ranging programs that provide access to the arts for the Tri-Valley community and beyond. The Bankhead Theater, together with the Bothwell Arts Center, is home to eight resident performing arts companies and over 40 studio artists and cultural arts instructors.

Now is the perfect to check out the Bankhead if you’ve never been to the venue before. Here are just some of the upcoming performances in December:

We look forward to seeing you and your loved ones at the Bankhead throughout the holiday season! Book your event tickets online or stop by the Livermore Valley Performing Arts Center box office.