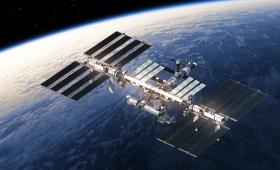 LLNL Scientist(s)
Crystal Jaing,
Nick Be
Teacher
Katherine Huang
Teacher’s School
Dougherty Valley HS
Abstract: The International Space Station (ISS) is a complex, built environment uniquely isolated from Earth. The interplay between the microbial community of the ISS and its crewmembers is important for assessing and preventing biomedical and structural complications for long term human spaceflight missions. We measured the microbial composition from both environment and crewmember samples using DNA sequencing and the Lawrence Livermore Microbial Detection Array. Our analysis showed that the microbial content from crewmembers and environmental surface samples evolve over time, and there is a high exchange of bacteria between the crew and ISS surfaces. This study will shed light on future crew and ISS environmental microbial surveillance efforts and the design of preventive measures to maintain crew habitat and minimize risk against potentially problematic microorganisms onboard spacecraft destined for long term space travel.

Crystal Jaing has a Ph. D in Biochemistry and Molecular Biology. Dr. Jaing is a Group Leader in Genomics in the Physical & Life Sciences Directorate at LLNL. She has broad expertise in molecular biology, genomics, biodetection and microbiomes. She has successfully led and executed multiple government-funded programs on pathogen detection, rapid diagnostics, microbiome, forensic analysis and predictive biology. She is the developer and project leader of the Lawrence Livermore Microbial Detection Array (LLMDA), the most comprehensive microbial detection platform that detects more than 12,000 species of microbes.

Nicholas Be is a Scientist and Deputy Group Leader in the Biosciences and Biotechnology Division at LLNL. His research is focused on applying DNA-based techniques for studying human pathogens and microbiomes. Dr. Be received a Ph. D. from the Johns Hopkins University School of Medicine. He currently leads research efforts aimed at applying microbiome analytics toward infections in combat injuries. Dr. Be is involved in a range of bioscience research efforts, including identification of microbial signatures in DNA sequence data, techniques for detection of antimicrobial resistance, analysis of microorganisms in the environment and atmosphere, and exploring microbial content on the International Space Station.

Katherine Huang teaches Honors Anatomy and Physiology and Accelerated Biotechnology and Research at Dougherty Valley High School in San Ramon. She received her B. S. in Biology at UCLA and MAT at UC Irvine. She also works in the Science Education Program at LLNL, having instructed the Waksman Student Scholars Program, which works closely with Rutgers University to sequence novel duckweed DNA in hopes of discovering proteins for uses such as bioremediation.