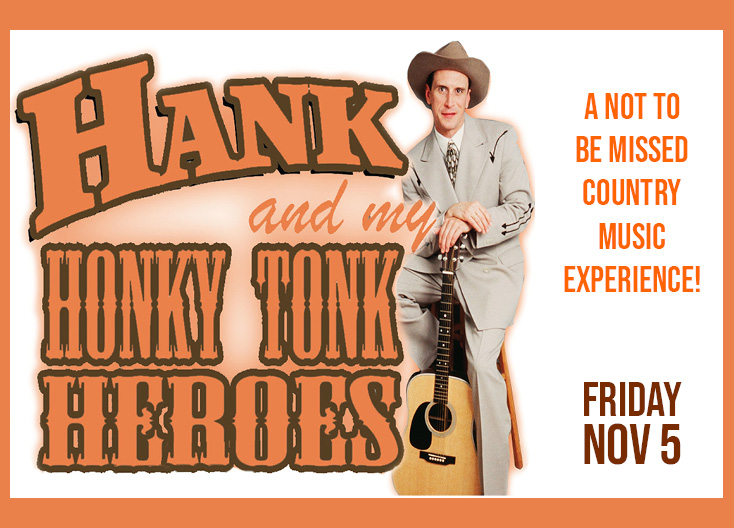 With hits such as “I’m So Lonesome I Could Cry,” “Your Cheatin’ Heart,” “Hey Good Lookin’,” “Cold Cold Heart,” “Lovesick Blues” and more, Jason Petty’s Obie Award-winning performance brings Hank Williams’ timeless music to life. In “Hank and My Honky Tonk Heroes,” Petty gives audiences a personal look at Williams growing up, how he became famous, and who influenced the legendary singer /songwriter. Not only will the great songs of Hank Williams Sr. be performed but songs from some of Hank’s influences including Jimmie Rodgers, Carter Family, Roy Acuff and Ernest Tubb, as well as those influenced by Hank such as George Jones, Elvis and Alan Jackson.

With Petty on acoustic guitar, accompanied by a fiddle, mandolin, steel guitar and electric guitar, Hank’s music is revealed as the epitome of country music…three chords and the truth. New York’s Theatre District was astonished by Petty’s portrayal of Williams, the nostalgic show won rave reviews and ran for nine months to sold-out audiences.  Going back to the beginning when Hank Williams was given his very first guitar, all the way to how the legend made a lasting impression on popular music, “Hank and My Honky Tonk Heroes” keeps audiences  clapping their hands and stomping their feet all the way through.

“[He] doesn’t just capture the phrasing and cadences of Williams’ singing.  He varies his delivery with the command of a performer who is fully inhabiting his character, not merely rendering him. I was genuinely surprised, even stunned, by Petty’s forceful, clear-eyed and moving depiction of Williams.”
— Rolling Stone