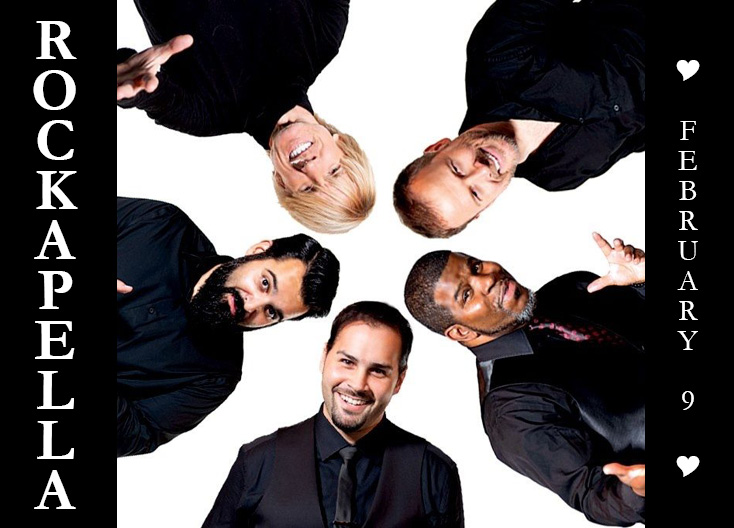 From their early years singing doo wop on New York City street corners, to selling-out performances around the world, Rockapella became sophisticated masters of the vocal art form a cappella. Now making a welcome fourth visit to the Bankhead, Rockapella will rock the house with just one instrument – their voices – but with an astonishing full-band sound.

Although recent interest in a cappella dates back to the success of the smash television hit “Glee,” Rockapella’s sleek vocals have been drawing fans old and new for almost three decades. The group has traveled far since their early collegiate roots, when an enthusiastic a cappella quartet of Brown University graduates started singing on street corners in 1986. They were soon seen regularly on “Where in the World is Carmen Sandiego?” and have since appeared on The Tonight Show with Jay Leno, and on stage with the Boston Pops Orchestra.

It seems impossible for Rockapella’s rich and resonant sound to be coming from just five guys with microphones – no instruments, no tracks, no mirrors. “People have a hard time believing it’s just us making all of that music: percussion, bass, melody and harmonies,” says Scott Leonard, the group’s chief songwriter and arranger. Leonard has been a member of Rockapella since 1991 and, while the group has evolved over the years, the changes have brought different talents and personalities, keeping the group fresh and dynamic. Throughout the decades, they have held true to their focus on precise vocals and a full harmony sound.

Whether evoking the smooth dance moves and sleek harmonies of The Temptations, singing a vintage Mills Brother’s tune, or putting their own spin on modern rock and hip hop, an evening with Rockapella is guaranteed to be filled with pure vocal magic.

“Some say the best musical instrument of all is the human voice – if you’ve seen Rockapella you know that’s the truth.”
–USA Today

Get ready for Valentine’s Day with Rockapella this year!