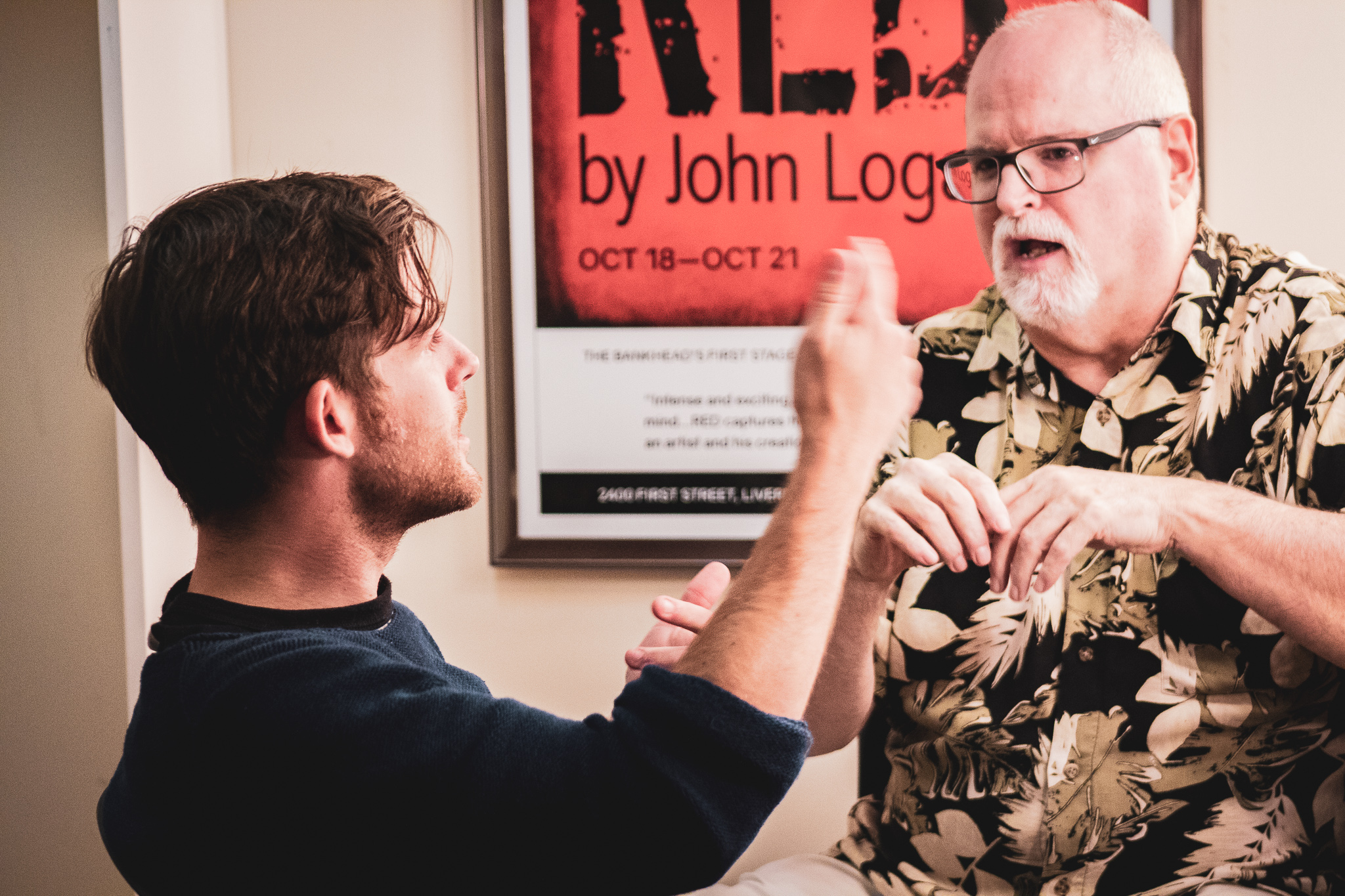 Almost ready!  Rehearsals are well underway for our new production of John Logan’s Tony Award winning play. It’s the first show fully produced by Livermore Valley Performing Arts Center, and first on the intimate Bankhead stage-on-stage.  Placing the actors and audience in such close proximity will offer a richer experience of this play’s compelling and dramatic power.  Directed by Misty Megia, “Red” stars Harvey T. Jordan as abstract expressionist painter Mark Rothko and Michael P. McDonald as Rothko’s young assistant Ken. Watch the cast interview video and hear about Michael’s long journey to the role of Ken and the insights Harvey has gained on Rothko’s art and life as he returns to the role after six years.

Then get your tickets NOW — seating is very limited — you don’t want to miss this show!

Winner of the 2010 Tony Award, “Red” captures a pivotal period in Rothko’s tumultuous career. The play provides a compelling view into the artist’s mind as he broods over his artistic legacy, even as he works on a notable new commission. Set in the late 1950s, “Red” is based on a true event. Rothko was asked to create a set of large murals for the new Four Seasons restaurant in New York. He hires a new assistant to help him, an aspiring artist eager to learn from a master but who also represents the emergence of a new generation in modern art. While they work side-by-side, the two challenge each other over their divergent styles, musical taste, philosophies and attitudes. The play debuted in London before transferring to Broadway and has been seen in multiple productions, including an acclaimed recent revival in London’s West End with Alfred Molina (Rothko) returning to the role he originated in 2009.

Harvey is stepping back in to Rothko’s shoes having performed the role in 2012 at Stage 3 in Sonora. As he says, “There are always new things to discover about any character,” he says. “Rothko was a difficult man, his personality and his emotions are on full display. Getting to revisit the role has given me a greater perspective and helped me understand him in new ways.” Harvey has appeared in a variety of roles at Steppenwolf Theatre Company, American Blues Theatre Company, and Minnesota Repertory Theater as well as in California at PCPA Theatrefest, Capitol Stage, the Davis Shakespeare Festival, and Sacramento Theatre Company.

Thrilled to make his first appearance as Ken, a role he auditioned for multiple times, Michael is returning to his East Bay roots. He spent his early years in Danville where he got his start on the stage and he attended performing arts high school in San Francisco before heading to University of Minnesota. Michael participated in the actor training program as part of obtaining his BFA and since appeared off Broadway in productions with The Acting Company, as well as Drury Lane Oakbrook and other regional theater companies.  He is a member of the Actor’s Equity Association, the union of professional actors and stage managers.

Misty has worked as a director, choreographer, set designer and performer throughout the San Francisco Bay area for over 20 years including at the Bankhead Theater. Among her many directing and choreography credits are the 2015 Tri-Valley Repertory Theatre production of “The Pirates of Penzance” at the Bankhead, as well as “Evita,” “The Drowsy Chaperone,” “Cinderella,” “Oklahoma,” and “Into the Woods.” She has appeared on stage in such roles as Val in “A Chorus Line,” Gloria Thorpe in “Damn Yankees,” Lorraine in “42nd Street,” and Virtue in “Anything Goes.”

Sets for the production will be designed by Carol Edwards with lighting by Eric Johnson.