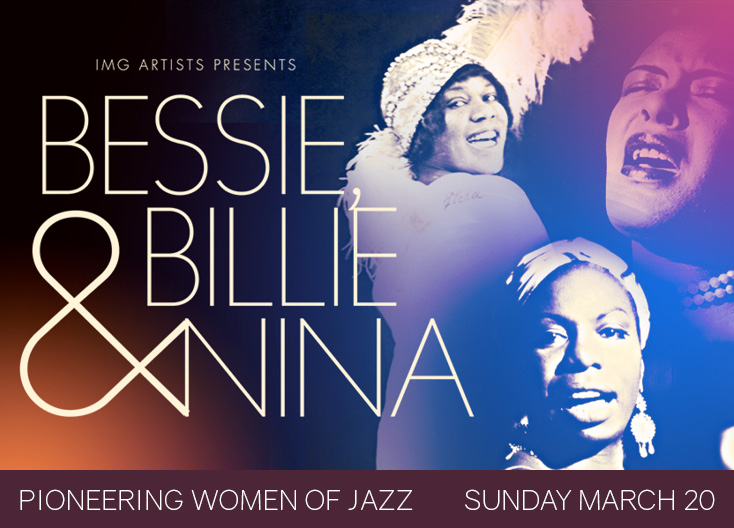 From the Jim Crow era South through the turbulent 1960s, Bessie Smith, Billie Holiday, and Nina Simone were among the most influential and popular singers of their times. Both within their music and outside of the clubs and concert halls, they wielded their exceptional talents to combat racial prejudice, sexism, and poverty. Whether powerfully and playfully claiming her autonomy and sexuality (Bessie Smith), forcing America to acknowledge the racism pervasive in the American South and beyond (Billie Holiday), or giving voice to the Civil Rights movement with stirring protest anthems (Nina Simone), these trailblazing singers spoke to and for the disenfranchised as women, African-Americans, and artists. All three women defied social norms, embracing self-empowerment through their art.

“Bessie, Billie & Nina: Pioneering Women in Jazz” features three dynamic vocalists, each a rising star in her own right: Charenée Wade a regular performer with Jazz at Lincoln Center, Tahira Clayton, co-leader of the Women in Jazz Organization, and Vanisha Gould, an important young voice on the New York jazz scene where she has graced the stages of Dizzy’s Club at Jazz At Lincoln Center, Smalls, The Jazz Gallery, and other esteemed NYC venues. Backed by an all-female band, the three celebrate the enduring legacies of these iconic women and artists with unforgettable performances of their classic songs, including Bessie Smith’s “Downhearted Blues,” Billie Holiday’s “Strange Fruit,” and Nina Simone’s “Mississippi Goddam.”

The musical and social legacies of Bessie Smith, Billie Holiday, and Nina Simone remain as relevant as ever. Their contributions resonate with today’s artists across many genres, as well as with ongoing movements toward progress and equality for women, African-Americans, and the LGBTQ community. The rich music of “Billie, Bessie & Nina” will entertain, inspire, and empower audiences during this pivotal time in our own history.