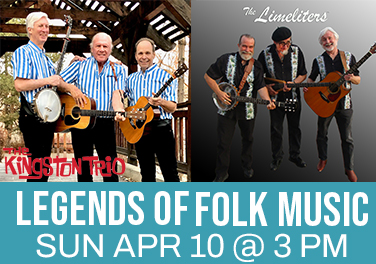 Two of the most popular folk groups of all time come together in one show! Awarded the Lifetime Achievement Grammy Award in 2011, The Kingston Trio is considered one of the most popular singing groups of the ’60s with the hits Tom Dooley, Scotch and Soda, Sloop John B, MTA, and more. The Limeliters are one of the most in-demand folk groups of the last 50 years, they have had several charted albums starting in the early 1960s and were the musical representatives for Coca-Cola for 3 years.

“They have achieved a fine musical patina that never grows old, only finer, sweeter and more pleasing.”
— Chicago Tribune