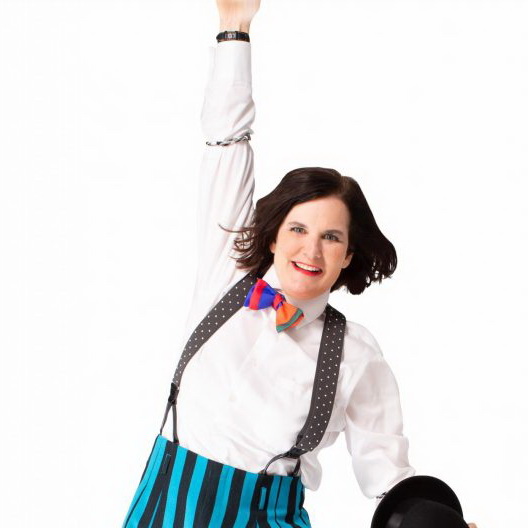 It’s impossible to attend a Paula Poundstone performance without marveling at her ability to interact spontaneously with the crowd. Her wry observations spark impromptu dialogue and guarantee riotous laughter. Armed with nothing but a stool, a microphone and a can of Diet Pepsi, Paula can find the hilarious angle of almost any subject, from the absurdity of the political world to the deviousness of housecats, and deliver it with a casual air, impeccable timing and razor-sharp wit

Paula Poundstone is known for her smart, observational humor and a spontaneous wit that has become the stuff of legend. Time magazine listed Paula’s HBO special, Cats, Cops and Stuff as one of The 5 Funniest Stand-Up Specials Ever. She was the first woman, in its then 73rd year, to share the dais with the President and perform standup at the White House Correspondents’ Dinner. She was the first woman, in its then 5th year, to win the CableACE award for Best Stand-up Comedy Special. Her second book, The Totally Unscientific Study Of The Search For Human Happiness was one of eight semi-finalists for the Thurber Prize for American Humor, the highest recognition of the art of humor writing in the United States; The audio book was one of five finalists for the Audio Book of the Year AUDIE award.

Paula can be heard weekly as the host of Nobody Listens to Paula Poundstone, the comedy podcast and as ‘French Trump’ on the satirical minicast, The French Trump Weekly Press Conference. When the Covid-19 crisis hit she started making self-described “goofy little comedy videos” to help people get through. They are available as RX Laughter Videos on her website along with her “Your New Best Workout Buddy” comedy workout video series.

Paula continues as a panelist on NPR’s Wait Wait…Don’t Tell Me! She is recognized in innumerable lists, documentaries and literary compendiums noting influential standup comedians of our time.