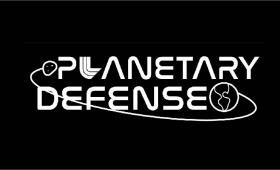 Abstract: Our planet has been continually bombarded by asteroids since its formation, 4.5 billion years ago.  While the frequency of large impacts has decreased, many potential Near-Earth Object threats remain undiscovered, so if or when they will impact Earth remains unknown. Fortunately, if an Earth-threatening asteroid is discovered in time, there are ways to mitigate or even prevent a disaster. If an asteroid is found to be on a collision course with Earth, it can be diverted by a few different methods. For long warning times and asteroids that are not too big, a heavy “kinetic impactor” spacecraft can be used to impact the asteroid at high speeds, giving it a slight nudge so that it safely misses Earth. When warning times are short or the asteroid is large, kinetic impactors cannot provide enough momentum for the asteroid to miss Earth. In these cases, a nuclear device can be sent into space to deflect the asteroid. Very short warning time scenarios, where deflection is impossible, can be handled by using a similar device to fragment the asteroid into many small, well-dispersed pieces. Scientists at LLNL provide computer simulations in preparation these scenarios so if the time comes where an asteroid is headed our way, we will be prepared.Megan Bruck Syal is a Group leader in the Design Physics Division at LLNL and leads the Planetary Defense project. She has a Ph. D. in Planetary Geosciences and a M. S. in Engineering from Brown University, where she investigated asteroid and comet impacts using both experiments and computer simulations. Megan uses a variety of numerical methods and experimental platforms to understand material response to energy deposition and shock.

Mary Burkey is currently a postdoctoral scholar at LLNL in the Planetary Defense group, where she works on modeling the nuclear deflection of asteroids. Before coming to LLNL, she was a Mirzayan Fellow at the National Academies of Sciences for the Committee on International Security and Arms control. She earned her Ph. D. in Nuclear Physics at the University of Chicago and Argonne National Laboratory.

Dan Burns taught Physics and Earth science at Los Gatos High School in the San Francisco Bay Area for 27 years. Dan has a B. S. in Aerospace Engineering from the University of Illinois, a Physical Science teaching credential from San Jose State University, and a Masters in Instructional Technology from the American College of Education. Dan developed curriculum for NASA, the USGS, the SETI Institute, the SCCOE, EnCorps, and NMSI. He was selected by NASA to be an Airborne Ambassador for Astronomy aboard NASA’s Sofia 747. Prior to becoming a teacher, Dan was an aerospace engineer for Lockheed/Martin where he developed advanced space systems.