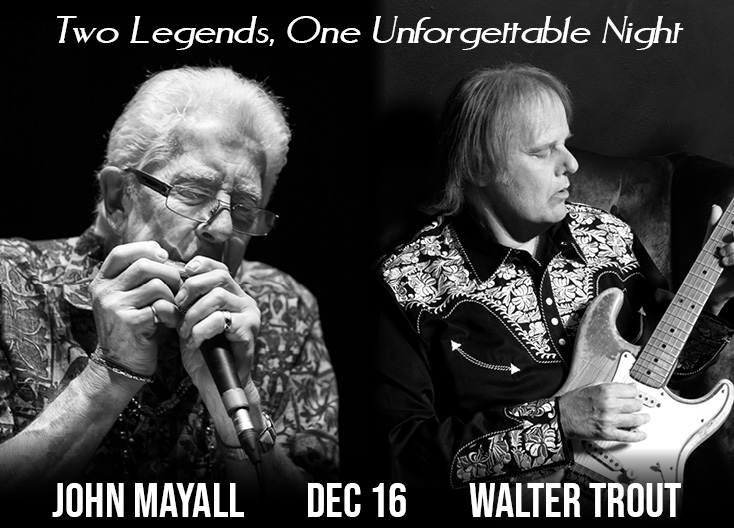 For over 50 years John Mayall has served as a pioneer of blues music, rightfully earning him the title, “The Godfather of British Blues”.  In 2013 John signed with Forty Below Records and has been experiencing a true artistic and career renaissance, including an induction into the Blues Hall of Fame and 2021 GRAMMY Hall of Fame induction (Blues Breakers album).  Over the course of the last several decades, Walter Trout has been a prolific artist regularly releasing studio albums including his 2017 all-star release We’re All In This Together.  A four-time BMA winner for Blues Rock Album of the Year, he continues to receive global accolades with no signs of slowing down.

JOHN MAYALL has an impressive musical career that spans over 50 years. The English blues singer, pianist, harmonica player, guitarist, and songwriter founded the band, John Mayall & the Bluesbreakers in the 1960’s—a band whose members included many celebrated blues and blues rock guitarists, such as: Eric Clapton, Peter Green, Jack Bruce, Mick Taylor, Walter Trout, and many more.  Attracted by the West Coast climate and culture, Mayall made a move from England to Los Angeles in 1969 and began forming bands with American musicians. Over the next three decades, Mayall became further revered for his many innovations in jazz, rock and blues and a succession of dynamic albums including the Grammy-nominated “Wake Up Call” featuring guest artists Buddy Guy, Mavis Staples, Albert Collins and Mick Taylor.  He has toured for decades with band members including Rocky Athas on guitar, Jay Davenport on drums and Greg Rzab on bass. Carolyn Wonderland became the first ever female lead guitarist in any of John’s bands and was a featured guitar player on John’s latest studio album “Nobody Told Me,” (2019) which also included Todd Rundgren, Steven Van Zandt, Joe Bonamassa, Larry McCray and Alex Lifeson on selected cuts.

WALTER TROUT has been nothing short of prolific over the course of a seven decade career that has spanned the globe, as one of the great purveyors of the blues and blues rock.  Trout’s history is equal parts thriller, romance, suspense and horror. There are musical fireworks, critical acclaim and fists-aloft triumph, offset by wilderness years, brushes with the jaws of narcotic oblivion, and the survival of an organ transplant. From 1973, when he left his New Jersey home headed to Los Angeles, he has followed a road that afforded him an opportunity to just play, sharing the stage as a sideman with Jesse Ed Davis, Big Mama Thornton, John Lee Hooker, Lowell Fulson, Joe Tex and John Mayall. After leaving the Bluesbreakers, he embarked on a solo career that established a deep legacy as a revered singer-songwriter in the world of blues and Americana. Trout continues to deliver inspired recordings, performances, and a voice that articulates insights into the world that inspires his deep perspective. There’s no autopilot emanating from Walter Trout, but a true sense of growing momentum, elements of surprise, and repertoire that continues to be more compelling with each new creation.